The Lions Club of Emu Park in a joint venture with the Rockhampton Regional Council have erected seats around Emu Park to honour deceased members of the Emu Park Lions Club. The seat for Judy Richmond, former president, has been erected beside the Singing Ship. Seats near the skate park, and Bell Park have been named for Steve Edworthy, Wolfgang Beilharz, (who started Oktoberfest) and Stan Wozniak. This project was completed during Lorna Rossiters term as president. This seat is in honour of Ross Coulter, who worked tirelessly for Emu Park. We hope he enjoys the view over Ladies Beach. 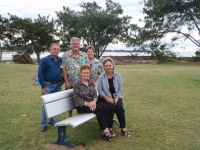 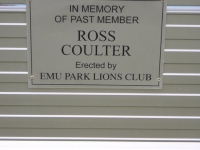 P1010127.JPG
Plaque on Ross Coulter aluminum seat. Five seats have recently been erected in varoius Emu Park parks in memory of past Emu Park Lions members. Plaques have been placed on these aluminium seats erected in park areas overlooking the beautiful coast line. 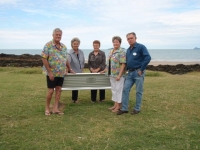